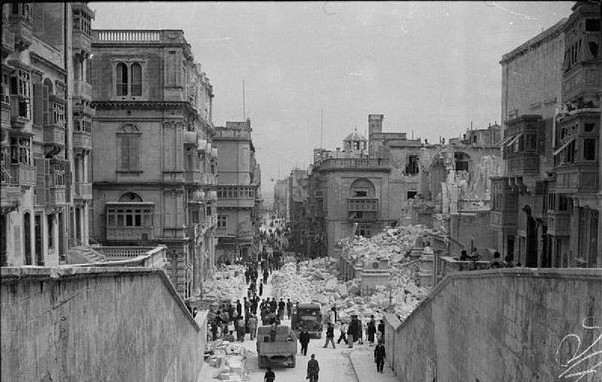 Much had happened to the besieged island since the three RAF Gloster Sea Gladiator bi-planes, Faith, Hope, and Charity had taken to the skies of Malta in June 1940 to fight off attacks by Italian bombers. The island had been bombed repeatedly.

This week in the war, Malta was close to collapse and at risk of invasion.

In the latter half of April 1942, the German and Italian air forces raided Malta well over a hundred times with bomber strengths that were typically in the hundreds.

On 20 April 1942, forty-six Spitfires were flown into Malta from the aircraft carrier USS Wasp but their arrival had been noted by the enemy. Almost all were badly damaged or destroyed while still on the ground.

Hemmed in by mines and with supply convoys failing to get through, Malta’s days seemed numbered. Field-Marshal Kesselring considered the island no longer a threat to Axis operations. His forces could invade and capture Malta whenever they chose.

Italian admiral Vittorio Tur was made commander-in-chief for Operation C3 (as the operation to invade Malta was called) and German general Kurt Student of Crete fame would command the paratroop force. Mussolini was very much in favour of the idea but, in the end, Hitler refused to give the order.

In early May 1942, sixty Spitfires were flown in from the aircraft carriers USS Wasp and HMS Eagle thereby tipping the balance of the air war over Malta. The enemy suffered such grievous losses that daytime air raids—at least around the heavily defended dockyards—became largely a thing of the past. Nonetheless, the supply situation remained critical and, for the island to survive, convoys would need to fight their way through.