This week in the War, 13–19 April 1942: Thirty Seconds over Tokyo—The Doolittle Raid 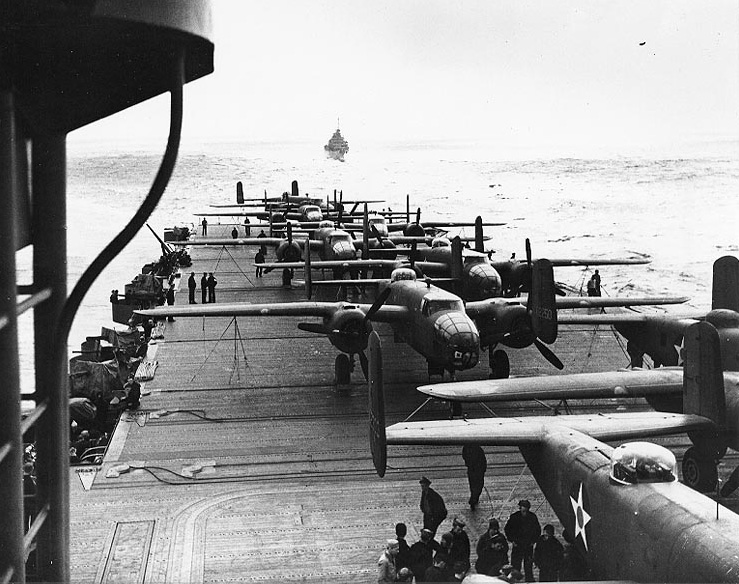 Thirty Seconds over Tokyo was the title of a 1944 movie starring Spencer Tracy in the role of Lieutenant Colonel Jimmy Doolittle (and also the title of the book on which the film was based).

This week in the war, the Japanese had seemed unstoppable. Most of the US Pacific battle fleet had been sunk at Pearl Harbour. The Philippines, Malaya, Singapore, and Burma, had fallen or were in the process of being overrun. Both India and Australia were threatened.

For the United States or Britain and her Commonwealth (or the Netherlands) to strike back seemed inconceivable. Yet on 18 April 1942, Lt Colonel Jimmy Doolittle led sixteen twin-engine B-25B Mitchell bombers from the flight deck of the carrier USS Hornet to bomb Tokyo and other cities in Japan. The idea had first been raised by Roosevelt, was fleshed out in US Navy headquarters, and planned and commanded by Doolittle himself. It was the first time that medium bombers had been launched on a mission from the deck of an aircraft carrier.

The USS Hornet and her escort made good their escape while, following their raid over Japan, the American bombers flew on towards China. Most made it, crashing landing in China (or in one case in Russia). The crew members of two planes were captured by the Japanese and some were executed or died from maltreatment. 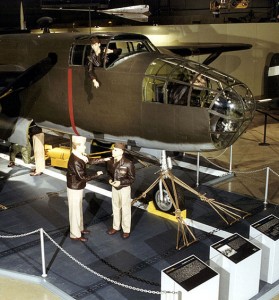 B-25 bomber, part of the Doolittle Raid exhibit at the National Museum of the United States Air Force at the Wright-Patterson Air Force Base in Dayton, Ohio [Public domain, wiki]

The material damage to Japan was negligible but the psychological damage was enormous, and morale on the Allied side received a much needed boost.

Anyone visiting Dayton, Ohio, can visit the Doolittle display at the National Museum of the United States Air Force on the Wright-Patterson Air Force Base.