Posted on October 3, 2014 by secondbysecond

This week in the war, on 30 September 1942, the Japanese launched the first of a series of air raids against Adak, an island in the Aleutian chain which was and is part of Alaska and therefore US ‘home territory.’ 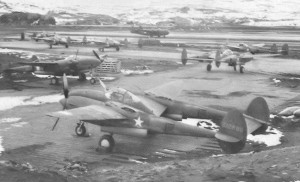 Squadron of Lockheed P-38 Lightning fighters, based at Adak in the Aleutians, 1942 [Public domain, wiki]

Earlier in the year, the Japanese had attacked the naval base in Dutch harbor and had invaded and occupied the Aleutian islands of Attu and Kiska with a view to preventing the US from advancing towards Japan across the northern Pacific. The Japanese did not occupy Adak since it had no military installations. The United States did not respond immediately because of the remoteness of the region.

By August 1942, the Americans were ready to go onto the offensive by establishing an air base on Adak. American planes from their base on Adak raided the Japanese base on Kiska, and vice versa.

In mid 1943, the USA retook both Attu and Kiska. The Americans suffered heavy losses during the Attu campaign, which included a dramatic and large-scale banzai charge against their lines. The Japanese had secretly abandoned Kiska before the American (and Canadian) invasion force had landed.