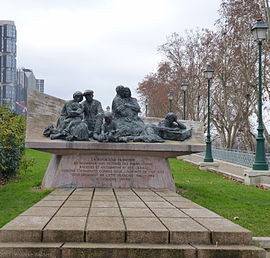 This week in the war, 16-17 July 1942, German troops aided by French police arrested 13,000 Parisian Jews that were without French citizenship and imprisoned them in the Vélodrome d’Hiver, the famous Paris cycling stadium near the Eiffel Tower. [‘Bicycle’ translates to ‘vélo‘ in French.]

The event became known as la rafle du Vel d’Hiv, i.e. the round-up of the Vélodrome d’Hiver, and was one of the most striking events to occur during the German occupation of Paris.

The detainees, including 4,000 children, were confined without adequate sanitation or sufficient food or water. Appeals to Pierre Laval fell on deaf ears. ‘They all must go,’ he declared.

The Vélodrome d’Hiver served as a staging area. The majority of the prisoners were sent on to the concentration camp at Drancy and then to Auschwitz and other extermination camps in Poland.