Posted on November 10, 2012 by secondbysecond 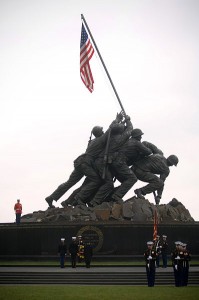 The United States Marine Corps was created in Philadelphia, two hundred and thirty-seven years ago today, on 10 November 1775.

The memorial shown to the left is dedicated to the men and women of the US Marine Corps who died in defence of their country and is based on the famous photograph of the Marines raising ‘Old Glory’ atop Mount Suribachi on Iwo Jima during World War II, 23 February 1945.

The picture below shows US Marines during the Battle of Guam, July 1944. Over 18,000 Japanese were stationed on the island and resistance to the US landings was fierce. 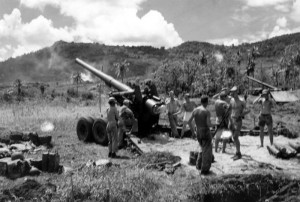 Resistance on Guam effectively came to an end on 10 August 1944, leaving the island and neighbouring Tinian and Saipan in US hands.

This entry was posted in In the news, World War II and tagged Iwo Jima, US Marine Corps. Bookmark the permalink.