Posted on August 3, 2012 by secondbysecond

This week in the war, on 31 July 1940, Hitler called a meeting of senior naval officers. He decided that the success of his proposed cross-Channel invasion of Britain, Operation Sealion, would depend upon Germany winning the air war over England—what would later become known as the Battle of Britain. The following day, he ordered the Luftwaffe ‘to crush the British air force by every means available’. 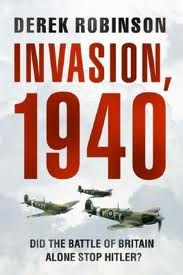 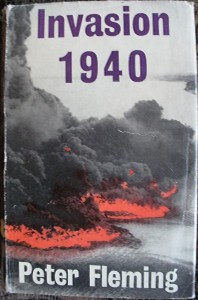 Two books, both with the same title but written roughly fifty years apart, one by Peter Fleming (1957), the other by Derek Robinson (2005), present somewhat different perspectives on Hitler’s Operation Sealion.

Most people in the British Isles believed that Hitler fully intended to invade their country. The past six weeks had seen their expeditionary forces ousted from Norway and then from France. The British Expeditionary Force (BEF) had been forced to abandon all of its equipment at Dunkirk. 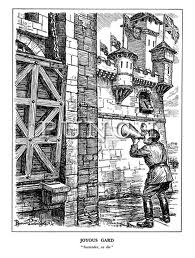 But the British knew (and their leaders were quick to reinforce the fact) that the last successful invasion of the British Isles had been in 1066 by William the Conqueror and, prior to that, by the Romans. Napoleon had tried and failed. The Spanish had launched an entire armada, and failed. All of Britain’s European neighbours (save Switzerland) had been invaded in the past hundred years or so—but not Britain. This Punch cartoon of July 1940 shows Hitler standing outside the British stronghold, vainly demanding its surrender.

In hindsight, one might agree with Peter Fleming, and dwell on the fact that Britain had been drained of arms and men, sent overseas—and not only to France—but to the Middle East, to India, and to fortresses such as Gibraltar, Malta, Hong Kong, and Singapore. Fleming quotes a report from the British Chiefs-of-Staff: “Should the Germans succeed in establishing a force with its vehicles in this country, our Army forces have not got the offensive power to drive it out.”

Or, one might side more with Derek Robinson, who focuses on the overwhelming superiority of the Royal Navy, and considers Britain’s chances (regardless of the outcome of the air war) to have been better than many accounts of 1940 suggest. Robinson writes: “Churchill knew that, without the Royal Navy, Germany would have at least attempted an invasion. Fighter Command could not sink a ship or even seriously damage one. Air power was irrelevant to a night crossing.”