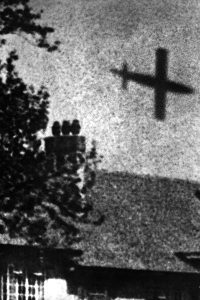 One of Hitler’s secret weapons, the jet-propelled V-1 ‘flying bomb,’ which also went by the name of doodlebug or buzz-bomb (because of the sound it made), had been developed in the Germany Army Research Centre at Peenemünde on Germany’s Baltic coast.

This week in the war, on 13 June 1944, the first V-1s were launched against London from launching pads on the French coast. The ‘V’ stood for Vergeltung, meaning ‘reprisal.’

Ten V-1s were launched that day but only four of them reached Britain and only one of the four reached London. Six Londoners were killed. 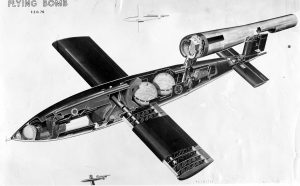 The range of a V-1 was over 150 miles and the warhead contained over 1,800 pounds of explosive. The speed was around 400mph—faster than almost any aircraft of the day. Over 8,000 V-1s were launched during the course of the war.
This entry was posted in World War II and tagged buzz bomb, flying bomb, Peenemunde, V-1. Bookmark the permalink.