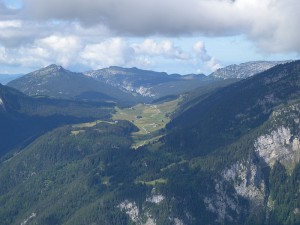 This week in the war, on 26 March 1944, a powerful force of German troops and pro-Vichy ‘Milice’  launched an assault against the Free French maquisards, who were holding out on the Glières Plateau in the mountainous Haute-Savoie region of eastern France.

The maquisards (members of the Free French maquis) had been gathering on the plateau since the end of January. They continued to grow in number throughout February and were supplied with arms and ammunition by the RAF.

By March, the maquisards numbered well over 400. The Germans attacked with aircraft and with ground troops, supported by Milice.

The scale of the final attack on 26 March caused the maquisards, who recognized that they were massively outnumbered, to scatter and flee. Many maquisards were killed in battle. Many were hunted down and killed in the days that followed.