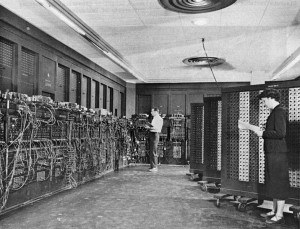 The ENIAC, at the University of Pennsylvania [Public domain]

This week in the war saw the beginnings of one of the landmarks of the computer age: on 17 May 1943, the US Army contracted the University of Pennsylvania’s School of Engineering to build the ENIAC: Electronic Numerical Integrator And Computer.

The ENIAC was not the world’s first computer—or even the world’s first programmable computer. That honour goes to the Z3, built in Berlin by Konrad Zuse, the man who is widely regarded as the ‘inventor of the computer.’ (The Z3 was destined to be destroyed in the bombing.) Also, before the end of 1943, the Colossus was up and running in Bletchley Park, UK.

Regardless of whether the task was code-breaking (like at Bletchley) or artillery calculations (as was the case with the Z3 and to some extent with ENIAC), all three computers shared a common feature: to program the machine, thousands of individual plugs and switches had to be inserted or clicked by hand. (No stored programs in those days! No disks or magnetic tape or even punched cards.)

University of Pennsylvania engineers, John Mauchly and J. Presper Eckert, take credit for the design of ENIAC and its almost 18,000 vacuum tubes. When a tube burnt out—which typically occurred a few times a day—then the machine had to shut down until the tube had been identified and replaced.