Posted on December 4, 2014 by secondbysecond 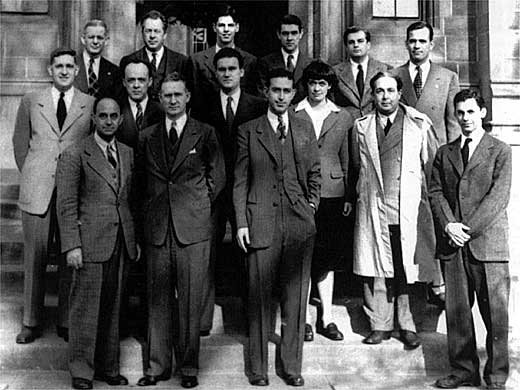 This week in the war, on 2 December 1942, ex-patriot Italian scientist Enrico Fermi produced the world’s first nuclear chain reaction. He created it inside a so-called atomic pile (now called a nuclear reactor) that he and his team of scientists had built on the football ground at the University of Chicago.

The ‘pile’ was made from layers of graphite and uranium. By bombarding the uranium nuclei with neutrons, Fermi was able to split the nuclei in two thereby producing energy and more neutrons which then went on to split more nuclei, producing yet more energy and yet more neutrons.

Fermi had calculated that the reaction would not get out of control (and result in a spectacular explosion in one of America’s most populated areas!). He shut the reaction down later that afternoon.

The experiment was an important step in the development of the atomic bomb. Fermi had been a professor of physics at the University of Rome but left for the United States in 1938 immediately after receiving his Nobel Prize. He was anxious to escape Italy’s new race laws. Fermi’s wife was Jewish.