Posted on November 23, 2014 by secondbysecond 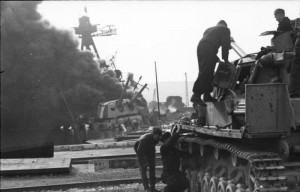 This week in the war, on 27 November 1942, German panzers rolled into the French port of Toulon. Admiral Jean de Laborde, commander of the French fleet, promptly gave the order that his sailors should scuttle their ships. If such a large and modern fleet had fallen into German and Italian hands, the balance of naval power in the Mediterranean would have shifted away from the Allies.

Some of the submarines ignored the command to scuttle and sailed across the Mediterranean to the North African ports of Oran and Algiers which, since Operation Torch, had been in Allied hands.