Posted on January 30, 2014 by secondbysecond

Prior to the attack on Pearl Harbour, the United Kingdom of Great Britain & Northern Ireland plus the Commonwealth and Empire and eventually the Soviet Union were locked in a life-and-death struggle with Hitler and his allies. After Pearl Harbour and America’s entry into the Pacific and European wars, it became obvious that help was on the way.

It arrived on 26 January 1942—the date that the first American soldiers landed on UK soil. 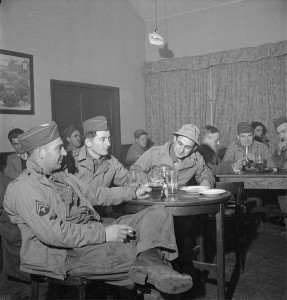 US soldiers enjoy British beer at a NAAFI canteen in the UK [Public domain, IWM, wiki]

The US troops, men of the United States 34th ‘Red Bull’ Infantry Division, landed in Belfast, the capital city of Northern Ireland. Eamon de Valera, the leader of the Irish Republic, protested strongly against their arrival. (The Irish Republic was neutral and not sympathetic to the British cause—although many Irishmen fought in the war as private citizens and joined the RAF and other branches of the British military).

The ‘Red Bull’ first saw combat when it landed in French Algeria (Operation Torch). The division fought in Italy for the remainder of the war, where the 34th participated in the fighting around Monte Cassino and afterwards in the landings at Anzio.