Posted on December 6, 2013 by secondbysecond 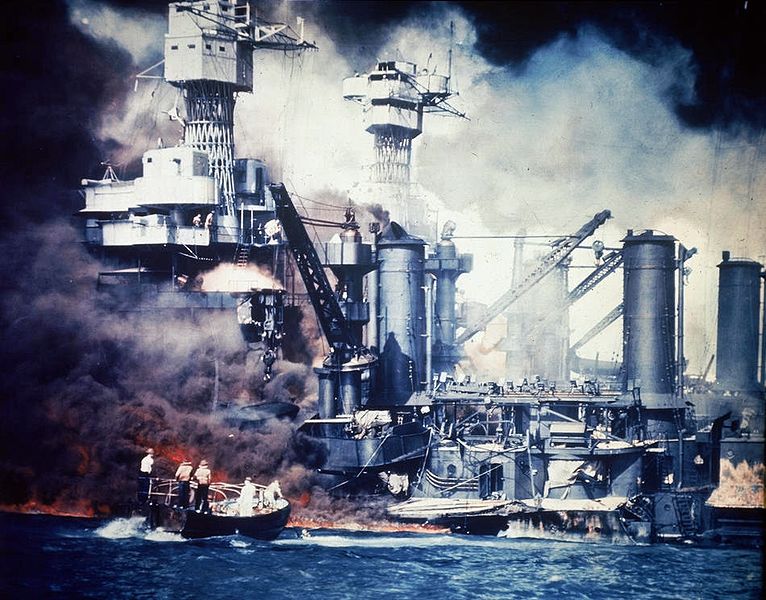 The morning of Sunday 7 December 1941 was clear and sunny in Hawaii. US Army radar operators located a flight of incoming planes but, instead of recognizing them as Japanese, misidentified them as American B-17s flying in from California. Nagumo’s carrier task force had achieved complete surprise.

The incoming Japanese planes first attacked Wheeler Field, where US aircraft were grouped together and sitting ducks.

Pearl Harbour was then attacked by bombers and torpedo-bombers. Of the battleships in Battleship Row: the Arizona and Oklahoma were lost; the California, West Virginia and Nevada were sunk in shallow water (and would be eventually refloated); and the Tennessee, Maryland and Pennsylvania were severely damaged. Over 2,000 lives were lost.

The Japanese coordinated their attempt to disable the US fleet with near simultaneous attacks against Thailand, and also against Hong Kong and the Malay Peninsula—both of which were British territory. Manila, in the Philippines, was bombed; and the Japanese would soon strike the islands of Midway, Wake and Guam. A gigantic offensive had begun and distances were vast.

News of the attack reached the White House in the early afternoon. To Roosevelt, the way forward was now clear: The United States would declare war upon the Empire of Japan. He knew from decoded messages that Hitler would soon declare war on the USA, and so America would be joining the European war as well.

The news reached Germany that evening and Hitler was exuberant. He declared that, with Japan as an ally, he could not possibly lose the war.

Winston Churchill heard the news of the Japanese attack on the radio while entertaining the American ambassador at Chequers, the prime minister’s country house near London. Churchill phoned Roosevelt immediately.

After the loss of Norway, after Dunkirk, after escaping the threat of invasion, enduring the Blitz and the continuing U-boat offensive in the Atlantic and losses in the Mediterranean, it seemed—against all odds—that Britain would end up on the winning side.