Posted on October 3, 2013 by secondbysecond 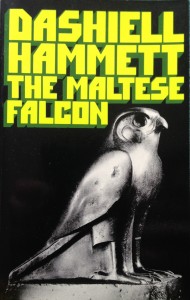 The Maltese Falcon was one of Dashiell Hammett’s most successful novels. According to the London Times Literary Supplement: “This is not only probably the best detective story we have ever read, it is an exceedingly well written novel.”

How true. In my view, in regard to crime novel classics, only Conan Doyle’s masterful tales of Sherlock Holmes come close.

The book is a pleasure to read, with its realistic and punchy dialogue, and detailed descriptions of the characters. And what characters! Sam Spade is the definitive private eye—smart and surly, and somewhat flawed. The reader is made aware of how Spade once yielded to the advances of his partner’s wife. 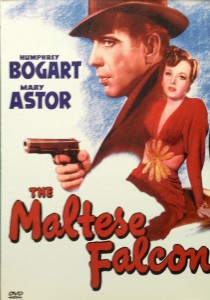 Kasper Gutman (‘The Fat Man’) is a ruthless but likeable villain. Joel Cairo is somewhat of a villain and, which was unusual for literature of the 1920s/30s, is recognizably gay. Perhaps most villainous of all is the story’s love-interest, a woman who goes by many names and is intent on killing or seducing anyone who stands between her and the ‘Black Bird,’ the legendary and jewel-encrusted Maltese Falcon.

This week in the war, on 3 October 1941, the screen version of The Maltese Falcon premiered in New York City. The movie is the equal in the book.

Humphrey Bogart played Sam Spade and Mary Astor played femme fatale Brigid O’Shaughnessy: “Now you are lying. You’re lying if you say you don’t know down in your heart that, in spite of anything I’ve done, I love you.” 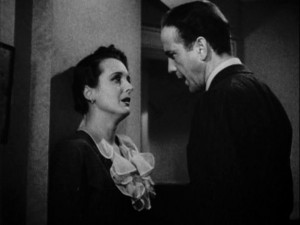 Wow. In fact much of Hammett’s dialogue was taken from the novel and inserted directly into the movie.

Mary Astor was nominated for an Oscar, as was Sydney Greenstreet for his role as ‘The Fat Man.’