This week in the war, at midnight on 19 July 1941, the mobilization of the V Army was announced on the BBC by ‘Colonel Britton’. 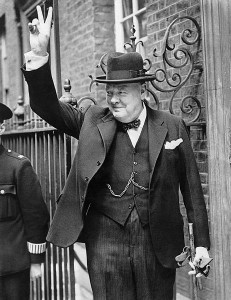 In reality, Colonel Britton was Douglas Ritchie, later to become the European broadcasting director for the BBC. The V-for-Victory campaign was his brainchild—demonstrating that resistance to the Nazi invaders was still alive, be it only through such simple acts as a child chalking a ‘V’ (for Victory, or Victoire in French)  on a playground wall.

Churchill embraced the V-for-Victory campaign and frequently delighted photographers by spreading his second and third fingers to make the famous sign. Colonel Britton’s ‘V-broadcasts’ had been going on for months, each one preceded by the opening bar of Beethoven’s Fifth Symphony, the musical equivalent of the dot-dot-dot-dash of the Morse code for the letter V. 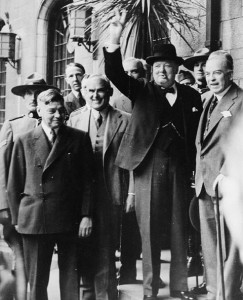 Britton’s message was simple. He told his audience—his V Army—that the war was not yet over, that the least among them could make a contribution, and that together they would win.
This entry was posted in World War II and tagged Churchill, Colonel Britton, Douglas Ritchie, V Army, V-for-Victory campaign. Bookmark the permalink.