In the news: Patty Andrews—last of the Andrews Sisters, dies at 94

Posted on January 31, 2013 by secondbysecond 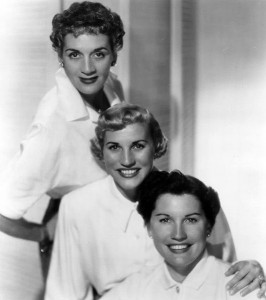 Patty Andrews, the last of the Andrews sisters, died in Los Angeles yesterday, Wednesday 30 January 2013, at the age of 94.

They were really sisters, and are shown here in a vocally upside-down order: LaVerne (who had the low voice), Patty (who had a middle-range voice), and Maxine (who could hit the high notes).

Patty’s voice was in the middle and she was always physically between her sisters when performing.

They entertained Allied troops throughout World War II, putting on shows in the USA and foreign theatres of war, Africa and Italy. Who hasn’t heard or heard of their greatest hits? Songs such as The Boogie Woogie Boy of Company B. Try this old recording of Don’t Sit Under the Apple Tree. Gordon Jenkins deserves credit for arranging and conducting the orchestra and chorus for this Andrews Sisters retrospective of their nostalgic hit I Can Dream, Can’t I?

This entry was posted in In the news and tagged Andrews Sisters, Patty Andrews. Bookmark the permalink.