Posted on October 25, 2012 by secondbysecond

This week in the war, on Wednesday 23 October 1940, Adolf Hitler met with Spanish dictator, Francisco Franco at Hendaye, a small town on the French-Spanish border, at the foot of the Pyrenees. In some respects, the two men were remarkably similar.

Like the Fuehrer, the Caudillo, had a somewhat ‘monkish’ lifestyle. Neither smoked nor drank alcohol. Both avoided being openly involved with women. Both believed their own country to be unquestionably superior to the other nations of Europe.

Hitler’s plan was to secure Spain’s entry into the war. Franco’s recent victory over the Soviet-supported Republicans in Spain’s civil war had been, in a large part, due to German arms and German pilots flying for Franco in the famous Condor Legion. (The Condor Legion‘s former commander, Hugo Sperrle, benefitted from the experience. By the fall of 1940, he was commanding Luftflotte 3 in its Blitz against London).

Hitler offered Franco the British colony of Gibraltar—which, the Fuehrer proposed, would be laid seige to and taken by a joint assault by Spanish and German troops. 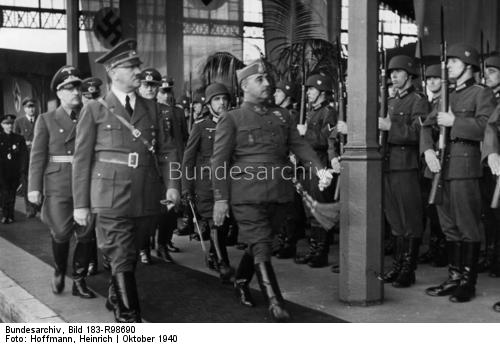 But Franco was not persuaded. He demanded seige guns that he knew were not available, grain that Germany could not supply, and French colonial possessions (such as Oran and French Morocco) that Hitler was averse to handing over. Hitler would be meeting with Vichy French leader, Maréchal Philippe Pétain, the following day—and the Fuehrer needed to retain some bargaining chips for dealing with Vichy.

From the German viewpoint, the meeting at Hendaye was a disaster. (“Like having his teeth pulled,” was how Hitler later described it).

In his insightful book Hitler’s Spy Chief—The Wilhelm Canaris Mystery (Phoenix, 2005), Richard Bassett attributes Hitler’s failure at Hendaye to his spy chief Canaris’s plotting with Franco behind the scenes. Canaris had no sympathy for the Nazis.

Regardless of the reason, Hendaye was a turning point in the war. If Britain had lost her naval base in Gibraltar, then she would have lost the whole of the Mediterranean. What would Vichy France have thought? What would America have thought? World opinion would start to see Britain as a ‘loser’. And who wants to support a loser?