This week in the War, 5–11 August 1940: Italians invade British Somaliland

Posted on August 7, 2012 by secondbysecond

This week in the war, 5 and 6 August 1940, the Italian army captured crucial positions in British Somaliland, Britain’s colony in the Horn of Africa.

The invasion force was 24,000 strong and included artillery, air support, and light and medium tanks. The assault was launched from bases in Italian East Africa. 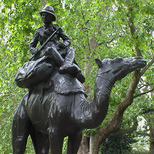 The British could call on 4,000 troops, including the Somaliland Camel Corps and the Nyasaland (now Malawi) King’s African Rifles, but had no armour and little artillery.

Despite being reinforced, the British were pushed back and forced to evacuate by sea. They were getting used to it! (Dunkirk, Norway,…). The evacuation was largely unopposed because, some say, Italy was interested in negotiating a peace treaty with Britain. Hitler had had the same idea. (See my post of 18 July 2012 An end to the war?).

Britain, of course, had worries closer to home. The Battle of Britain was well under way and about to enter phase two: the Luftwaffe’s attack on RAF airfields.

This entry was posted in World War II and tagged Camel Corps, Somaliland. Bookmark the permalink.