Posted on April 4, 2018 by secondbysecond 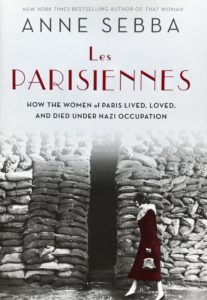 What is it that Rick (played by Humphrey Bogart) says in the movie Casablanca when Ilsa (played by Ingrid Bergman) asks if he remembers Paris?

Rick says, “I remember every detail. You wore blue; the Germans wore grey.”

Those lines were spoken in a movie about a memorable time in the history of Paris, the City of Light, which was very much a city of women during 1940—1944, when Paris was occupied by the German army.

Anne Sebba has written a remarkable book, Les Parisiennes, describing Paris and the lives of its women during that dark period, les Années Noires.

So many Frenchmen had been captured or were fighting overseas or were forced to work in factories, far from home. To a large part, it was left to the women to face the conquerors. Increasingly desperate for food, the women of Paris, whether wealthy or poor, became engaged in the everyday struggle to survive.

Sensitive as well as thorough, Les Parisiennes records the details of the world of women in wartime Paris, from Elizabeth Arden’s paint-on stockings to the cost of a packet of cigarettes, from French traitors to heroines, such as Odette, and let’s not forget the German women of Paris, the Blitzweiben—so-called ‘little Grey Mice’—who were posted to the city and saw Paris from the eyes of the foreign tourist. Neither does Anne Sebba forget the brave Frenchwomen who perished, nor those who were deported and endured the hell of concentration camps, like Ravensbrück. 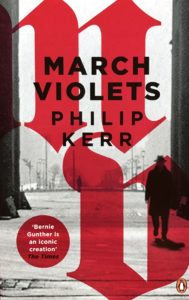 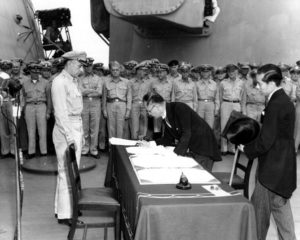 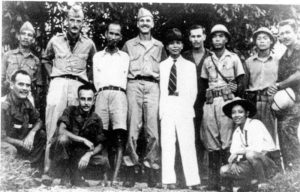 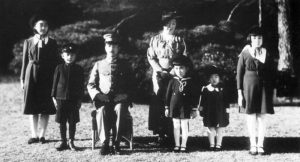 This week in the war, on 15 August 1945, Emperor Hirohito broadcast on the radio to the Japanese nation. His broadcast announced Japan’s acceptance of unconditional surrender to the Allies.

It was the first time that the Japanese People had heard the voice of their Emperor.

Late on the night before the broadcast, over a thousand troops attacked the Imperial Palace, hoping to prevent the transmission from taking place. They were eventually driven off and the recording of the Emperor’s speech was transmitted as intended.

Posted in World War II | Tagged Hirohito | Comments Off on This week in the War, 13–19 August 1945: Hirohito broadcasts to the nation 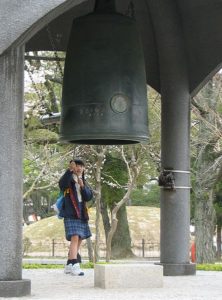 This week in the war, on 6 August and on 9 August 1945, atomic bombs were dropped on Hiroshima and Nagasaki.

The necessity of using the atomic bomb is still debated today.

Posted in World War II | Tagged atomic bomb, Hiroshima, Nagasaki | Comments Off on This week in the War, 6–12 August 1945: Hiroshima and Nagasaki

This week in the War, 30 July–5 August 1945: King George and President Truman meet at Plymouth

Posted on August 4, 2017 by secondbysecond 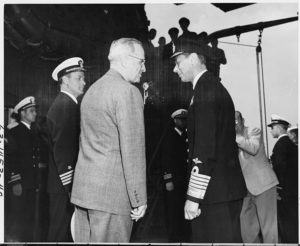 This week in the war, off the coast of Plymouth, England, President Harry S. Truman, en route home from the Potsdam Conference aboard the USS Augusta, met with King George VI, who was on board the British battlecruiser HMS Renown.

The atomic bomb was a focus of discussion. At least one of Truman’s party, Admiral William Leahy, was sure that the power of the bomb had been exaggerated and remarked that it sounded like a ‘professor’s dream.’

Later, after he had become fully aware of the bomb’s destructive power, Leahy condemned the atomic bombing of Hiroshima and Nagasaki as barbaric. 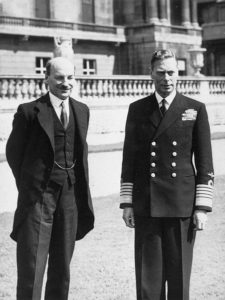 In the July general election, the British Labour Party had won its first majority in British history and, this week in the war, on 26 July 1945, Clement Attlee became the first Labour prime minister of Great Britain.

The Labour Party’s platform was based upon full employment and social reform, namely the sharing of wealth through the introduction of a welfare state.

It would also become the role of Clement Attlee to take part in the final negotiations at the Potsdam Conference. 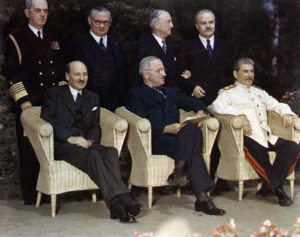 The Potsdam conference opened this week in the war, on 17 July 1945.

Three countries participated: The Soviet Union—represented by Joseph Stalin, the United States—represented by Harry S. Truman (who had become president following the death of President Roosevelt), and Great Britain—represented at first by Winston Churchill and then by Clement Atlee, who became prime minister as a result of the Labour Party winning the July 1945 general election.

The continuation of the war against Japan was a major item on the agenda. So was the re-organization of post-war Europe, including moving the boundary of Poland westward into Germany.

Meanwhile, a top-secret telegram was sent from Washington to Potsdam, to inform the US Secretary for War, Henry Stimson, that the atomic bomb had been successfully tested at Alamogordo in New Mexico. 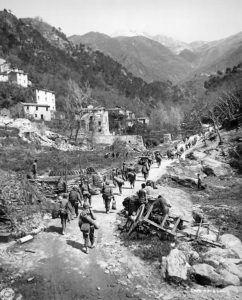 This week in the war, on 15 July 1945, the first contingent of American troops that had been serving in Europe boarded their ship in Naples, Italy, and set sail for Japan.

The invasion of the Japanese homeland had been set for 1 November.

American warships had already been bombarding the Japanese mainland as a preparation, and the Japanese were making preparations of their own by training thousands of men for kamikaze air and sea attacks against Allied shipping.

Posted in World War II | Tagged invasion of Japan, kamikaze | Comments Off on This week in the War, 9–15 July 1945: Preparing to invade Japan