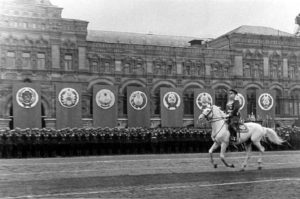 June was the month for victory parades in places as far apart as Moscow and Rangoon.

This week in the war, on 24 June 1945, Marshal Georgy Zhukov rode his white stallion, Idol, in a gigantic march-past in Moscow’s Red Square. (Zhukov had begun his army career as a private in the Czarist cavalry.)

Soviet soldiers carried hundreds of captured German banners and laid them before the Lenin Mausoleum.

This entry was posted in World War II and tagged Idol, Moscow, Zhukov. Bookmark the permalink.