Posted on November 8, 2015 by secondbysecond 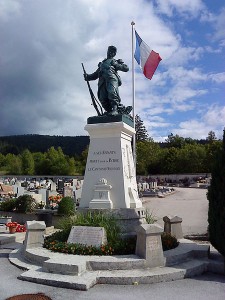 This week in the war, on 11 November 1943, the resistance fighters of the Maquis in the Ain department of the Rhone-Alpes region of France occupied the town of Oyonnax for a few hours.

To commemorate the Armistice of 1918, they marched to the war memorial and laid a wreath of flowers in the form of the Cross of Lorraine—the symbol of Free France and the struggle for liberation from the Nazi occupiers.

The inscription on the wreath read: Les vainqueurs de demain à ceux de 14–18 (From the conquerors of tomorrow to those of 14–18).

Before leaving, the members of the Maquis joined with the townsfolk in singing the Marseillaise.