Posted on October 16, 2015 by secondbysecond 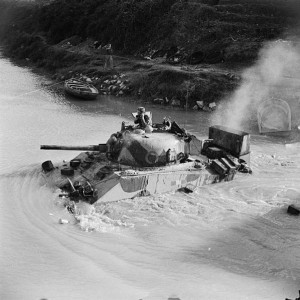 A Sherman tank of the 4th County of London Yeomanry fording the Volturno river at Grazzanise, 17 October 1943 [Public domain, IWM]

This week in the war in Italy, on the night of 12/13 October 1943, troops from the US 5th Army crossed over the Volturno river. Further advance was made difficult by torrential rain and fierce opposition from German units north of the river, including the elite Hermann Goering Luftwaffe armoured division.

Also on 13 October 1943, the Italian government declared war on Germany. Italy was now divided, with forces allied with Britain and America located to the south and Mussolini’s Italian Social Republic, still loyal to their Axis partner, located to the north. 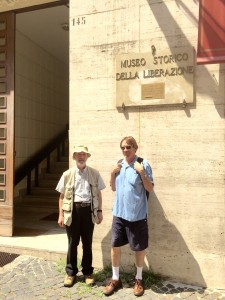 A sunny day in Rome: Jeff Williams and WWII aficionado, Steve McCarthy, stand outside the former Gestapo HQ, now the Historical Museum of the Liberation [photograph by Edith-Mary Smith]

The German army was already spread throughout northern and central Italy and proceeded to occupy as much of the country as it could.

The former Italian embassy in Rome became the new headquarters for the Rome Gestapo. It now houses the Historical Museum of the Liberation (Museo Storico della Liberation) and is home to memorabilia and displays related to Italy’s struggle to oust the Nazi occupiers.